We live in a universe where literally every system can multiprocess (Some claim that the universe itself is a parallel system but I’m going to leave that for another blog) but most of our programs are sequential. This is mainly because parallel systems are arduous to design.

Concurrent systems grow in complexity exponentially because the more concurrent the system gets, more the places it could fail. Handling for all the failable cases is what makes concurrent design laborious. Moreover, many developers find it hard to differentiate concurrency from parallelism.

Many confuse concurrency with parallelism. I had this very confusion in my college days and watching Rob Pike’s “Concurrency is not parallelism” cleared it up for me. I would recommend you to watch it if you suffer from the same confusion but if you haven’t got 30 minutes, there is a brief summary:

Parallelism is running tasks at the same time whereas concurrency is a way of designing a system in which tasks are designed to not depend on each other.

Consider you are designing a server in which when a user sends a request, you read from a database, parse a template, and respond. When the server expands to serve more than one user, you can’t work parallelly since there is a limit to how many parallel tasks a system can do. It would be impossible to design such scalable systems we have today with just parallelism. 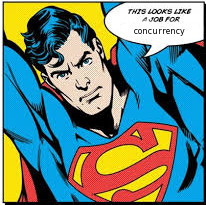 If you meticulously analyze this problem, you would see that a considerable amount the time is wasted waiting for the response from the database, a.k.a blocking.

Blocking occurs when a task is waiting for some operation to complete. This can be I/O, network calls, database calls, file reads, etc. During blocking, a process remains idle until it can proceed.

A concurrent system can take advantage of this and run a different task when blocked hence utilizing CPU to its max.

Since the tasks are designed to run independently in concurrent execution, the system can effectively switch between them when one is blocked. Back to our server problem, the server can be designed to work concurrently so that when one task (user request) is blocked due to database call, the process can perform another task instead to blocking.

In short, concurrency is a design in which two or more tasks can overlap but not necessarily run in parallel, though concurrency can be used to achieve parallelism since the order of execution of tasks does not matter in a concurrent system.

Threads have been the idiomatic approach to concurrency since its conception. In threading, the task is broken down into smaller units called threads which run concurrently (or parallelly if the system allows it to).

In the above example, ten concurrent instances of thread are created. They can run parallelly or overlap. This approach gets complex when the threads need to access the same data.

Consider two threads, one trying to increment and the other trying to decrement the same memory location. When it is run sequentially, the result would be the old value. But when run concurrently, assume the first thread reads the value and before it writes the update, the second thread reads the old value and updates the memory and then the first threads writes. Now the value would be one increment from the old. This is called a race condition.

Running the above Java program would yield a different value for each run. (Python can never have a race-condition due to its awesome yet outdated GIL).

Race Condition can be overcome using a lock. A lock makes sure only one thread can access the critical section, i.e., the data variable here, to avoid race-condition.

Green threads / Microthreads / Processes (Erlang VM) / Go routines / … are conceptual threads that run on the VM rather than running as an actual thread. The VM takes care of multiplexing these to actual threads hence these are light-weight compared to traditional threads. They take up less memory, quicker to start, and a lot can be created. You can hit java.lang.OutOfMemoryError only with a few thousand threads whereas you can create millions of goroutines with a commensurable amount of memory. Since these are language specific, they have language-specific pizzazz in them.

The above is an example of goroutines. In Go, starting a goroutine is as simple as calling the function with a go keyword in front of it.

Asynchrony is what I used in the server example. This model efficiently utilizes blocking time to run another task. There are various approaches to Asynchrony.

Callbacks are the most basic approach to Asynchronous Programming. It is heavily used in GUI development and is the backbone of Node.js.

In the above Node.js example, the fs.readFile method takes in a callback (a function) which it calls when it is done reading the file. This way, console.log('done.') doesn’t have to wait for the file to be read.

Callbacks are used in GUI programming as such:

The above is an example of callbacks using Tkinter. The button’s bind method takes a callback (a function or a lambda) as an input and executes it when the button is clicked. This way, the whole program runs in a single thread without blocking.

Excessive use of callbacks leads to a problem known as Callback Hell. Promises were created to overcome this.

Promises / Futures / Deferred / … are alternatives to callbacks where a function, instead of taking a callback, returns a promise object. This object can be used to continue after the asynchronous task.

The problem in callbacks and promises is that they complicate the flow of the program as they have a different mechanism for error handling, looping, etc. To simplify this, async/await was created.

Async/Await lets you write asynchronous code that looks and feels like synchronous code. This way one can take advantage of non-blocking flow without much change.

In the above example, the main function is denoted with the modifier async and all the asynchronous calls in it are marked with await. This way, we can use readFile like simple synchronous method.

reactive programming has observables and observers who “react” to the events emitted by the observables. Observables can be a mouse click, a network call, a socket connection, a file stream, etc.

ReactiveX or Rx is a set of tools to do reactive programming. In the above example, an observable is created for line by line file reading and is subscribed to using the subscribe method.

Coroutines allow functions to pause themselves and give control to another function. This way, a function doesn’t have to completely end to pass its control. Coroutines provide concurrency but not parallelism.

Concurrency has become the fundamental of modern programming as even systems as small as mobile phones come with multiple cores. Hence, understanding concurrency would let us write efficient and powerful software.